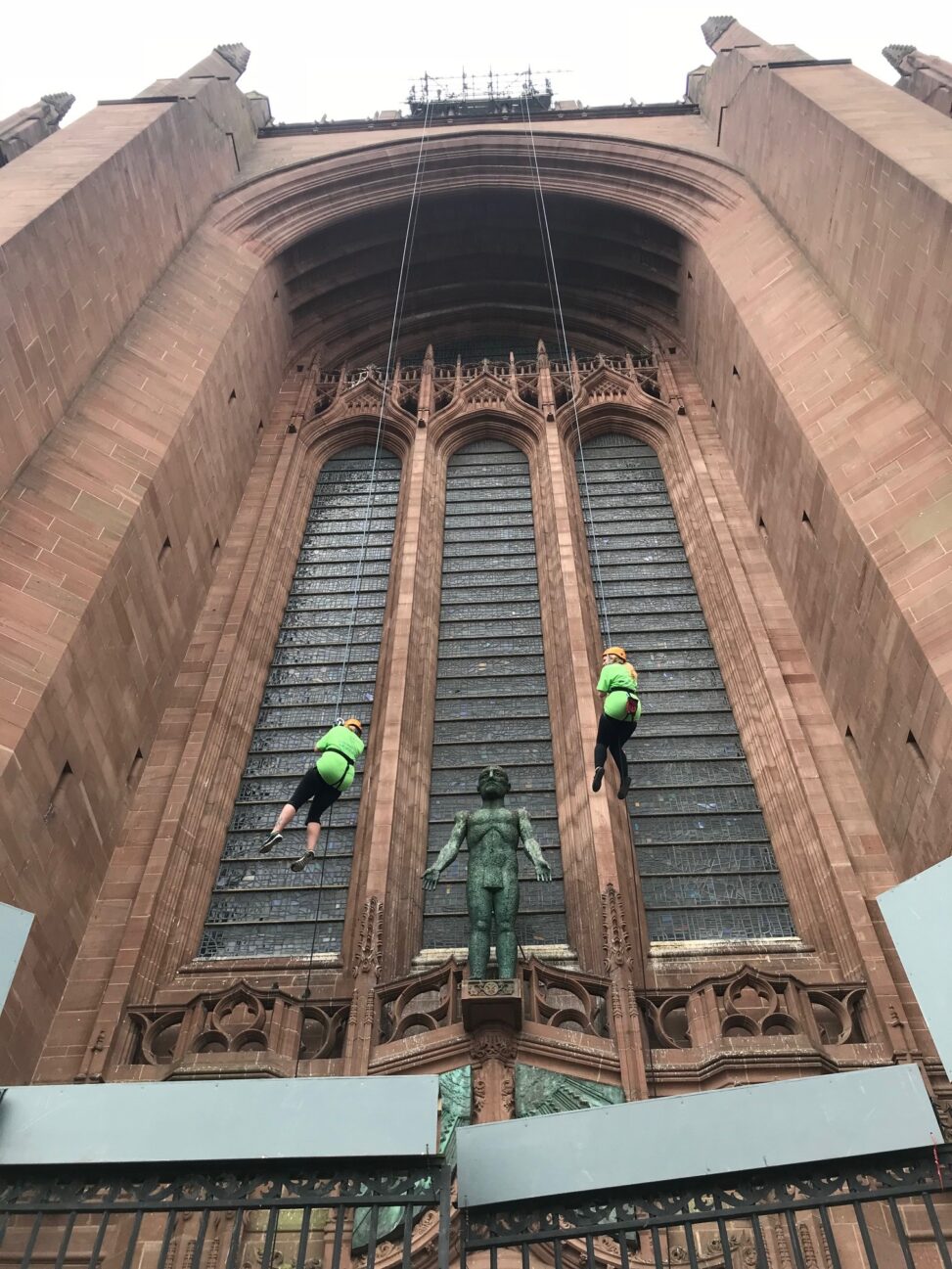 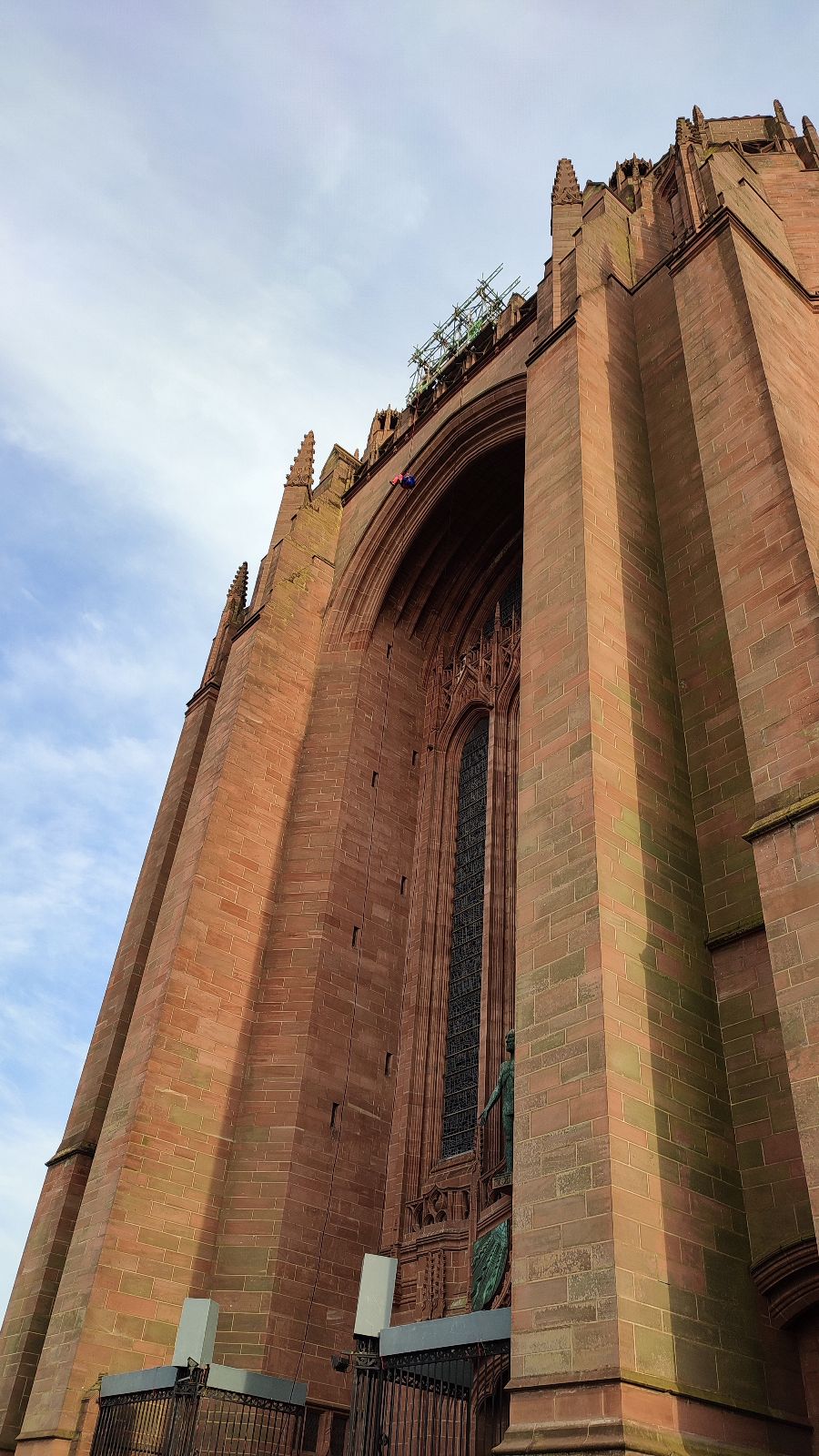 That red speck is a person.

Throwing myself off a tall building would’ve been unthinkable a few years ago, but lately I feel more open to trying things that scare the hell out of me.

How I found it

On 3 June, while browsing the Liverpool Cathedral website in search of displays similar to the amazing “Space, The Universe and Everything,” I learned that it’d be closed weekends in July for abseiling (aka, rappelling in America).

Local charities sign on and then open a limited number of slots to individuals or groups who want to drop 150 feet down the main entrance, register, pay a fee and agree to raise a minimum amount of money, usually between 160-250 GBP per person.

Why I did it

It was surprisingly easy to say yes.

I also proposed that a friend and I do it together, and M answered rather quickly that he’s interested and it fit with his schedule.

My fear of heights, which originates from falling off a trail and down a cliffside when hiking as a child, faded into the background of a bigger picture with compelling reasons to focus on. 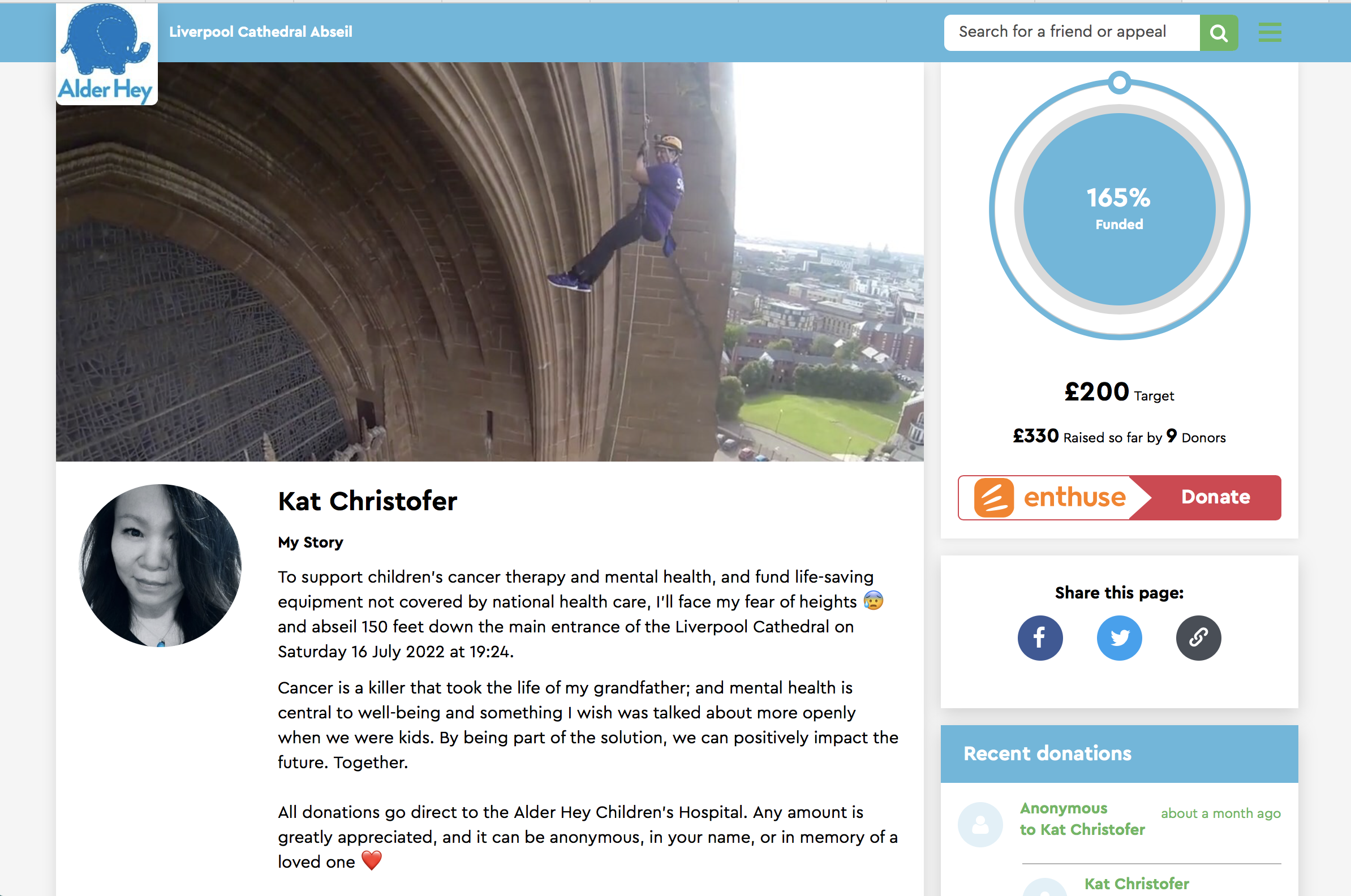 I’m touched and grateful to the 10 lovely people who donated — a few quite generously (PL, SA, D/S/T) — allowing me to exceed my goal with less than an hour of fundraising, plus two others (WB, DW) who called me brave and offered kind words of support.

I had only two goals for the abseil:

M encountered transport delays, causing his 5-hour journey to be doubled; and we had several misunderstandings, which were discussed openly and solved before going to the cathedral.

He confessed some apprehension and used words like “survive” and “panic” but did his best to be calm, use humor and adopt my two goals. I assured him that we’d be stronger together and it’s going to be a great evening. 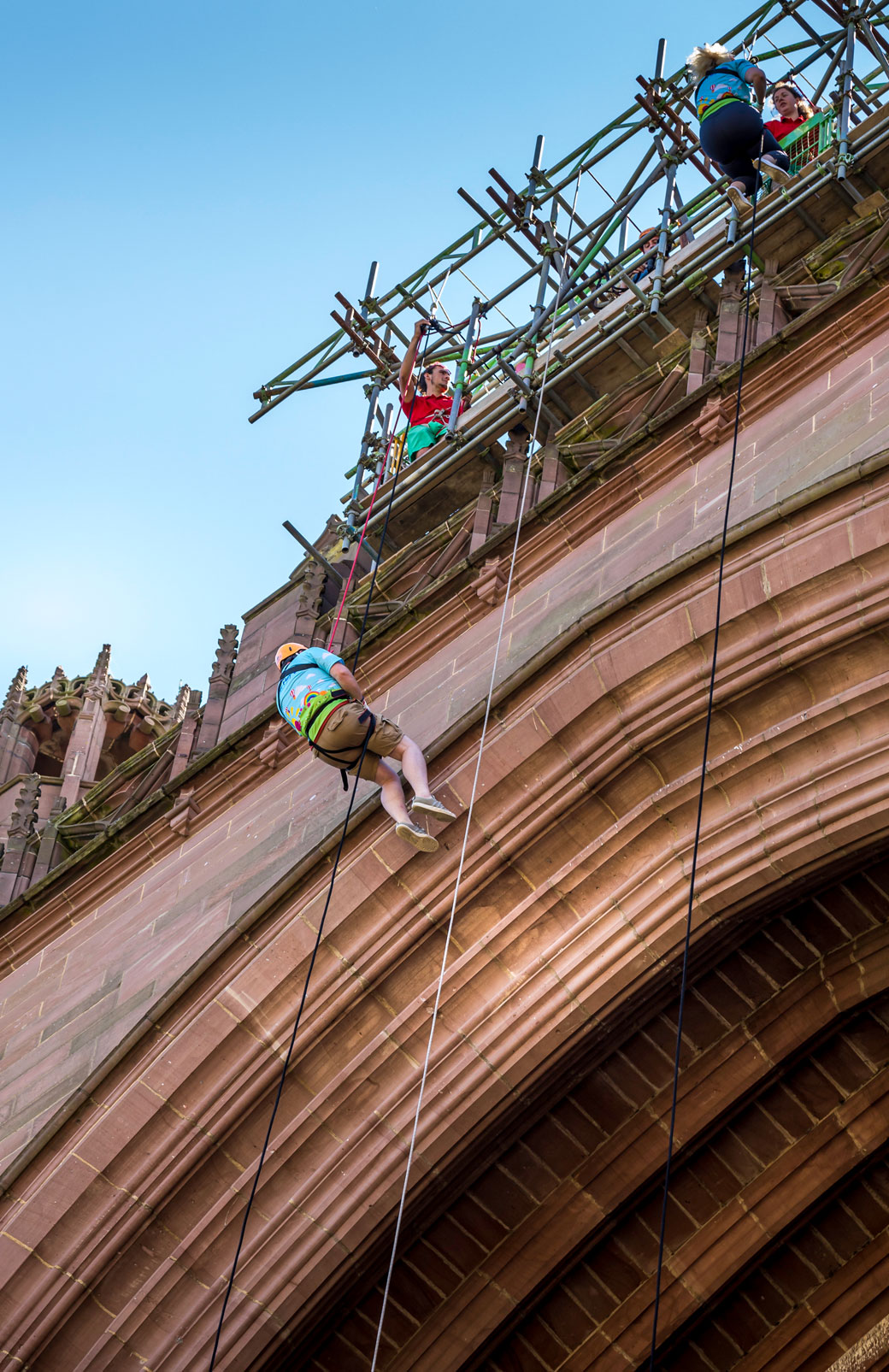 Let me first say the weather was gorgeous! Warm, dry, slight breeze, and clear, which would allow us to see the Mersey and beyond at sunset.

We arrived 30 minutes ahead of our scheduled time, checked in at the blue container office, said hello to Alder Hey at their table on the lawn to collect colorful shirts, then watched and applauded others coming down the rope to the emcee who pseudo-interviewed them upon hitting the ground.

At 19:20 they put harnesses, gloves and hard hats on us, and directed us and two others to sit in plastic chairs until called at 19:50.

Escorted to the west wing of the dark and silent cathedral to take a small lift half way up, we turned a corner and ascended the rest of the way by narrow stairs in an area normally closed to visitors. 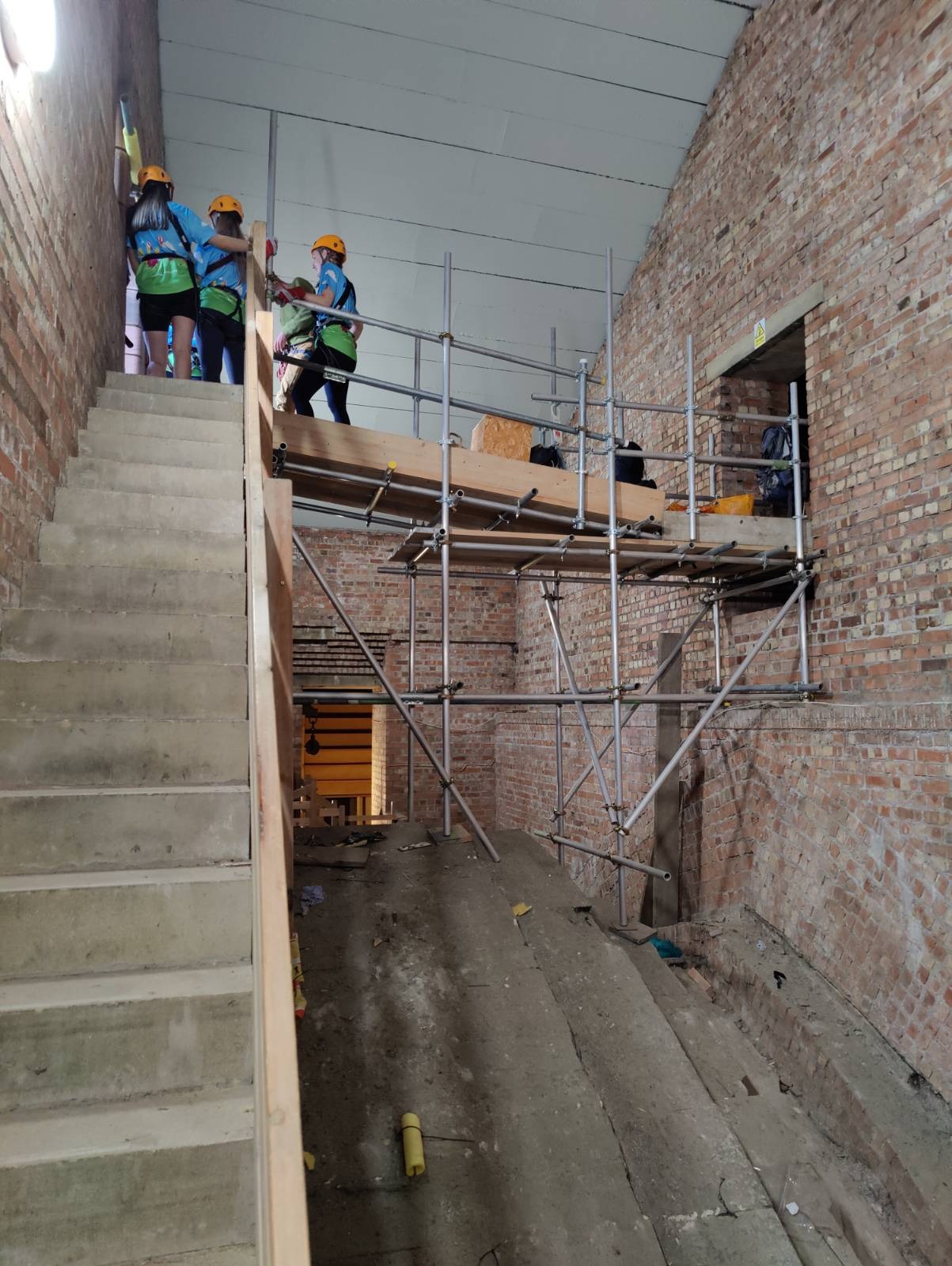 Photo by M, after being voluntold to take it.

We waited on this lower platform (POV), located just below the curved top of the stained glass window.

Once at the top of the stairs, we’re briefed on how to position our body and hold the rope to abseil down, plus given the chance to practice by leaning back on the makeshift bridge. M went first so I could observe, then I took a turn.

Feeling the wind on my face and seeing the view through the scaffolding, I knew we’re about to be called.

I also knew I’m going first because it was my idea, and that’s how it works.

We could go left or right, and I go right to climb the ladder and onto the platform built of scaffolding and wood planks not bigger than a small coffee table, which I share with abseil experts there to keep us safe and hook us in. 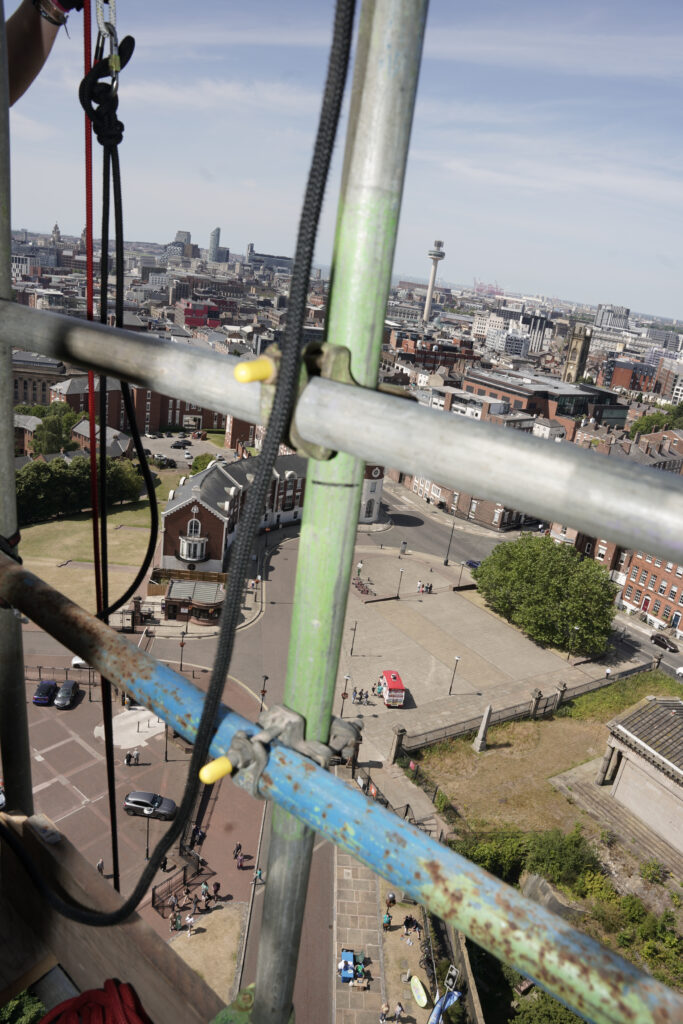 I thank her for helping us and being there to make our experience the best it can be, and she says it’s the first time anyone has expressed gratitude all weekend.

But hey, it’s time to turn around with my back to the sun and sky, stand on the edge of nowhere, and jump. Or fall back. My choice. I start to laugh because wtf kind of choices are these.

I’m about to jump and my right leg started to shake, which happens in moments of anxiety. I normally disconnect my mind and body to get through it, but I shock myself by getting mad and internally yelling, “oh, no, you don’t, we’re going!” (M later tells me that he looked over at me for reassurance and saw that I didn’t hesitate to jump, so he did too.)

And it’s at that moment, the photographer pops out of the lattice. Oh hey there, I don’t look terrified. But I do look terrible in yellow. 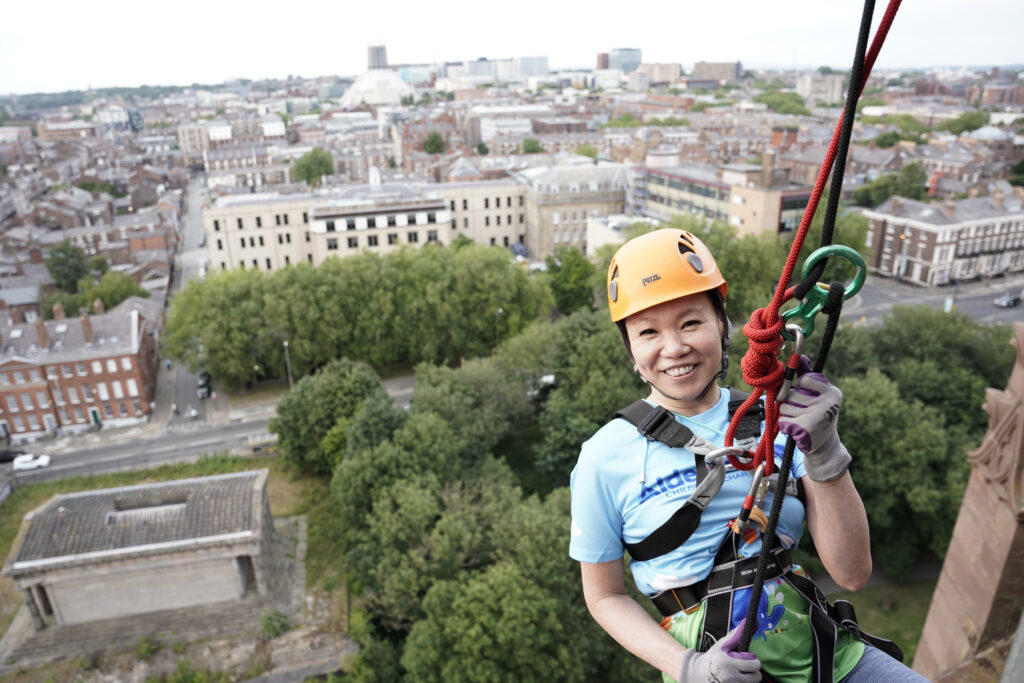 For reasons I don’t understand, I spun 360 all the way down. No one else I observed did the same, and I’m okay with that because I could alternate taking in views of the cathedral, the city, the river and the horizon as the sun set.

Wow! Can you believe we’re outside the stained glass windows? Look at that brickwork. You can see the Royal Liver, and St. John’s Beacon, and bombed-out St Luke’s. Oh, the sky and the colors. Amazing! And the Mersey. So beautiful. Hey, the statue!

Back on planet Earth, M says that he got a kick out of my spontaneous narration, but at some point he stopped listening. His focus became getting down as soon as possible, which is why he beat me to the ground by a mile, even though he jumped after me. M asked: “Was there a statue?” Um, yes, lol. 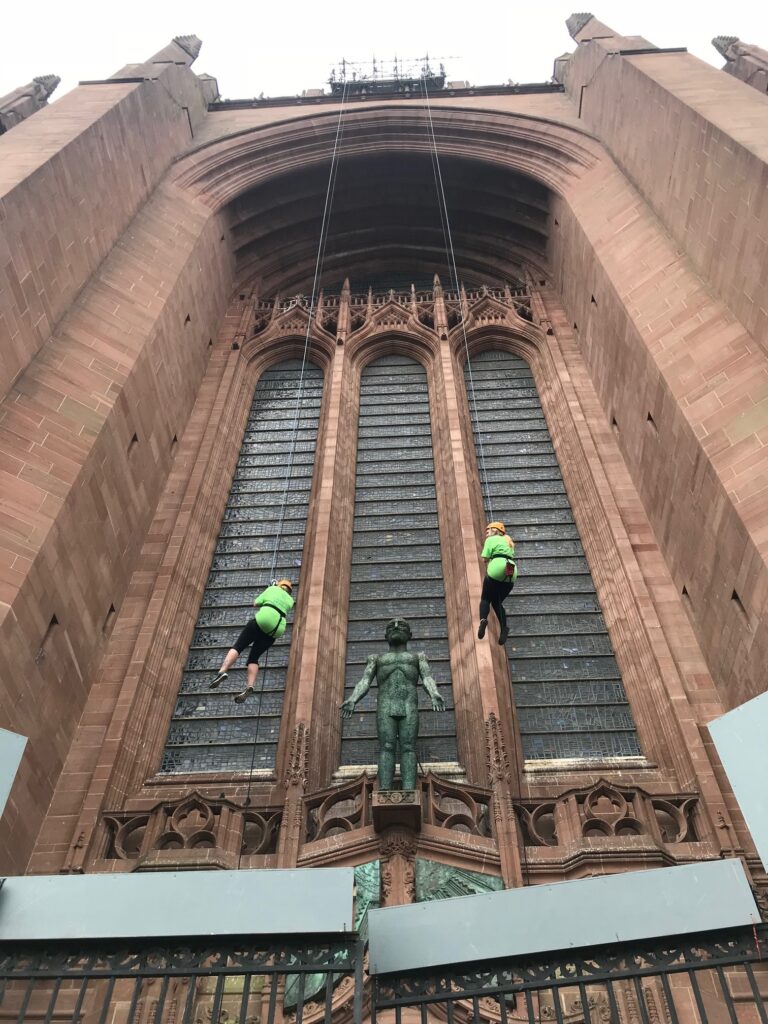 We were the last abseilers of the day, and an hour behind schedule by no fault of our own, so there was no one to cheer us on, no emcee to ask questions, no tables or chairs, and nothing to share on social media because our photos were uploaded 10 days later.

And that was fine by us because we had an important date with a steak and a martini flight.

Abseiling off the Liverpool Cathedral is something I’ll remember for the rest of my life.

M and I selected Dare Skywalk + Edge at the Tottenham Hotspur stadium as our next challenge.

A friend in Stockholm asked if I’d be interested in doing Takvandring, which is a rooftop tour of old town, and I immediately said no. Richard Ayoade did it on Travel Man, and I broke into a cold sweat watching him free-standing/walking/climbing with only a rope hooked to a rail near his feet. No rails to hold and no actual paths, plus 90 minutes with a guide. Too long, no escape, no thanks.

I booked Up at the O2  in London to do on my own because I thought this might be a good warmup to Dare Skywalk. Update: On September 10, the day after I completed the Thames Moonlight 10-mile Trek, I woke up early and was in the first group to walk/hike across the rooftop of the O2 Arena.

Previous to this, the biggest heart-racing activity was launching myself over a 30-story gorge due to low body weight on Ziptrek Eagle in Whistler, Canada. Skydiving with a friend’s club got canceled, so I’ve only done indoor skydiving at Windbona in Vienna and iFly in Florida for my birthday.